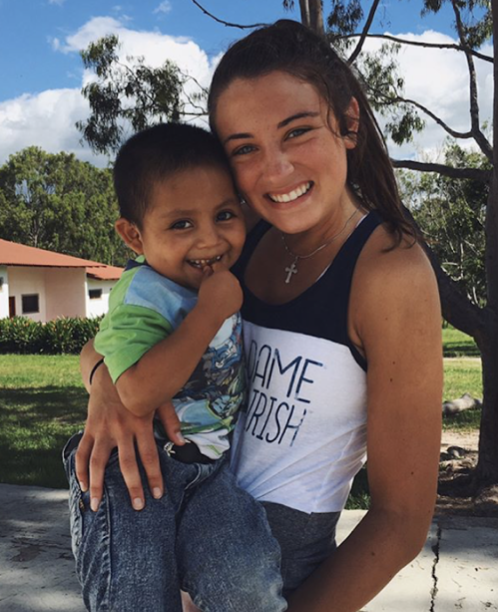 Most people cannot imagine traveling 2,000 miles to a foreign country and serving in a community that is far less fortunate than what they are accustomed to. Traveling to an unfamiliar, far-away place to help others takes great courage, dedication, and sacrifice. High school senior, Erin Spahn, lives for opportunities like these.

At eighteen years of age, Erin Spahn has dedicated many hours to serving the less-fortunate, not only in the United States, but in Central America as well.
Spahn joined her older family members on mission trips to Central America just before starting 7th grade. Her family had been going to the same orphanage for years and had formed family-like relationships with the people there. She was now old enough to experience her first mission trip. Spahn was not excited to be leaving her friends on the last day of 6th grade to go to Honduras. Little did she know the impact this mission trip was going to have on her life. Spahn now says, “It was awesome and so worth it.”

Over the span of six years, Spahn has been on five mission trips. Locally, she has cared for babies of teen moms at a summer camp in Michigan. She has also traveled to Honduras three times to work on a medical team at an orphanage. Most recently, Spahn worked with students from her high school, Benet Academy, to build a home for a family in Guatemala.

After asking about the relationships that were made on each mission trip, it is clear that Spahn has a special place in her heart for the people she has served over the years. Spahn said, “In Guatemala, I made the strongest relationships because we built a house for a family and were with them for four days in a row.” The mother of the family was raising three children and one grandchild all by herself. Six months prior to the mission trip, the father had kicked his wife out of the house and demanded she take the children. Spahn’s heart went out to this mom as her hardship and resilience were expressed throughout the week. Spahn reminisced that “she was so willing to tell me stuff because she needed someone to talk to. I gained a lot of perspective so it benefitted us both.”

Spahn specifically bonded with the six year old son, Derek. The two immediately clicked and spent many hours together over the course of the trip. Even though their time spent together was limited, Spahn, Derek, and his mom formed a family relationship. Spahn said she was “crying when it came time to part with the family.” While saying her final goodbyes, Spahn gave her necklace to the mom so she would have something to remember their experience.

Spahn admits she was the happiest version of herself while working in Guatemala. After her group finished building the house, they spent a day touring Guatemala. Spahn noticed she was filled with innate joy after serving the Guatemalan family. She realized she had “never been happier than that day. I acted in ways I hadn’t acted before.” This abounding gratification made it extremely difficult for Spahn to return home.

Each mission trip has had lasting impacts on Spahn. Spahn told of the time when one of the girls she had served in Honduras passed away shortly after Spahn had returned to America. The memories Spahn had made with the girl suddenly became more meaningful. She added that it was the “little things like helping her with her homework and playing on the playground. They mean so much more now that I know I can’t get them back.”

Spahn has been inspired by the attitudes of the afflicted people she has served. The patients she encountered in Honduras had heavy burdens to carry. Spahn said, “One guy didn’t even have an arm. They were all so grateful and happier than most Americans.” She was also struck by how appreciative the orphans were, given their unfortunate situations.

Mission trips have greatly influenced Spahn’s views towards life and her hopes for the future. Her extensive experience serving in poorer countries has led Spahn to find her passions in life. Spahn plans to become a nurse to increase her impact on the world. Spahn’s drive for helping others will touch many hearts as she continues serving those in need.