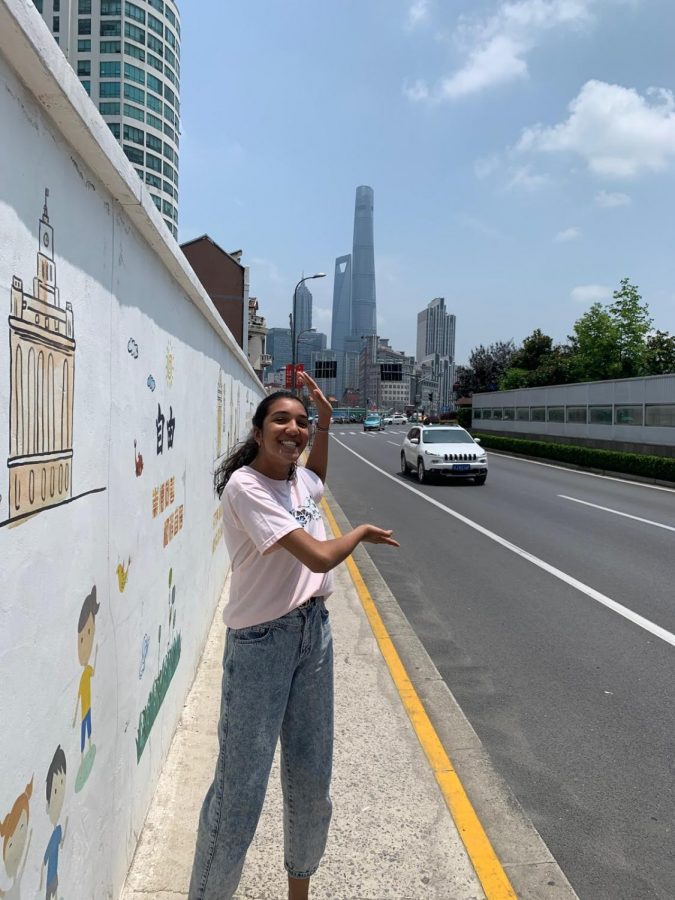 A brilliant sun shone overhead as Imtisaal Naeem and her friends headed into the heart of Shanghai, China to celebrate the last day of sophomore year. Renting bikes for the day and biking around the dense yet sprawling urban hub, Naeem and her friends enjoyed their first day of summer by grabbing lunch and going ice skating in the city. Similar to the way many teens in the western suburbs enjoy a day in Chicago, Naeem and her friends were no different.
For Wheaton Warrenville South student, Imtisaal Naeem, who recently moved from Shanghai, getting to know other cultures has become a part of life. Her travels and immersion in various cultures have allowed her to attain a wider, more nuanced vantage point than most high schoolers.

Born in Carol Stream, IL and moving to Shanghai the summer after 3rd grade, Naeem learned at a young age how to thrive in new environments. For most American students, moving to a new country with an entirely different language, Mandarin no less, would be daunting to say the least. Naeem initially thought the same.
“In the beginning it was really bad because Shanghai was totally different because no one spoke English, and I was like nine years old freaking out because no one spoke English,” Naeem recounted.

Adjusting to the language was likely easier for Naeem not simply because she was young, but also because she was already bilingual. As a Pakistani-American, Naeem speaks Urdu as well as English and now Mandarin.

Furthermore, her exposure to multiple cultures and languages has shaped her understanding of the world around her. “A lot of people here are just American, I am Pakistani-American so that already gives me a different perspective. So then moving around the world–and I’ve also traveled a lot of different places–so I’m knowledgeable about different places.” As a teenager who has already been to 23 countries, Naeem holds a perspective many WWS students cannot claim. She holds a perspective on not only the differences—the skyscrapers that dominate Shanghai and the blunt style of communication—but also the similarities that bind all nations, tongues and people together.
As a nation so many thousands of miles away, it can be difficult to understand and picture life in a place thought to be so foreign. Imtisaal Naeem lamented at this struggle, and urged that the only way to really understand those on the other side of the world is to immerse oneself in the culture. From misconceptions about Chinese people eating cats and dogs to the naive thought that Asia is homogenous, Naeem stated, “Since I’ve been able to travel to so many different places, I’ve just been more into…global news because I understand what the area is like so it just puts into perspective news and what’s actually going [on] around the world because you talk about China and you’re like ‘Oh China’s a place, but you’ve never really been there. You don’t really understand it.’”

As technology allows us to communicate with individuals around the world, it may sway us into believing that we understand people around the world. However, oftentimes the geographical divide that exists can cause us to see other cultures from within the perspective of our own. Imtisaal Naeem offered one summative piece of advice for anyone looking to expand their world perspective: “If someone were to be going to China, I would tell them not to compare it to here, because you can’t compare it to here because it’s so different…You really do have to have an open mindset if you want to enjoy yourself.”